I got to be “that house” last weekend. The one in the neighborhood whose backyard grill is billowing out aromas that make you stop what you’re doing and say aloud, “OMG, what are they making over there and can we have some?”

In my case it was the woody scents of the maple grilling plank and fresh rosemary sprigs under my Rosemary and Lemon Pork Chops that caused a fragrant scene. Ever since the Cedar Planked Salmon with Brown Sugar I’ve been pretty hooked on plank grilling. I just love that smoky flavor the planks impart to whatever you’re grilling and the meat seem to come out so moist throughout. When I was at Williams-Sonoma the other day I picked up another cedar plank for more salmon soon and a maple plank, which came with the recipe I’m sharing today. They also sell an alder plank, which I’ll have to try next.

I was so pleased with how these pork chops came out. Pork chops are kind of my cooking nemesis – I have a tendency to overcook them, especially boneless ones like this recipe called for. I’ll credit the planks and my trusty meat thermometer for ushering me toward the juiciest, most flavorful chops I’ve made in a while! 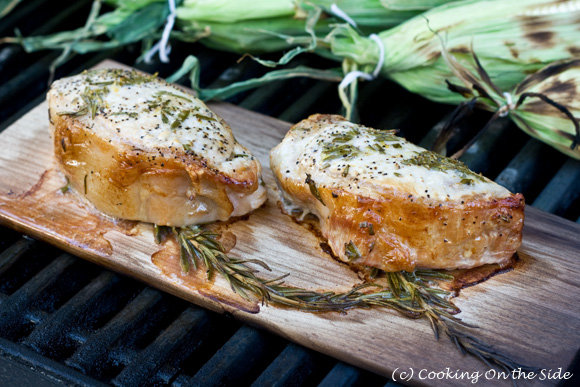