I like to think of myself as someone with some semblance of self-control when it comes to food. I usually know when I’ve eaten enough of something and I tend not to overindulge. That all goes out the window when it comes to kettle corn.

Once I start eating kettle corn I cannot stop.

The sweet, salty, crunchy stuff is positively addictive – whenever we buy one of those huge bags of it at the farmer’s market it rarely lasts till the end of the day. When I read the OMG Kettle Corn post on Chaos in the Kitchen last week and learned that not only was it relatively easy to make at home but there is also a recipe for stovetop popcorn on packages of kernels…well, you can figure out what happened next. Yes, I became the popcorn QUEEN over the weekend! In addition to making kettle corn that rivaled my favorite from the farmer’s market, I also indulged in a batch of caramel corn and a savory combination of sea salt, thyme and olive oil.

It turns out there are a few schools of thought it comes to popping technique. One suggests adding just a few kernels to the oil and waiting for them to pop, signaling the oil is hot enough to add the rest of the kernels. Another says just put it all in at once. Since the latter was recommended by the Jolly Time folks and, quite frankly, it was simpler I went the dump-it-all-in route. It worked just fine. As long as I kept the contents of the pot moving and removed it from the heat when it was all done I didn’t have any burnt kernels. Now, for the kettle corn I did go back to the start-with-a-few-kernels approach as I found that sugar really seems to want to burn! But, like I said, the key to success was to continually shake the pot during the popping. 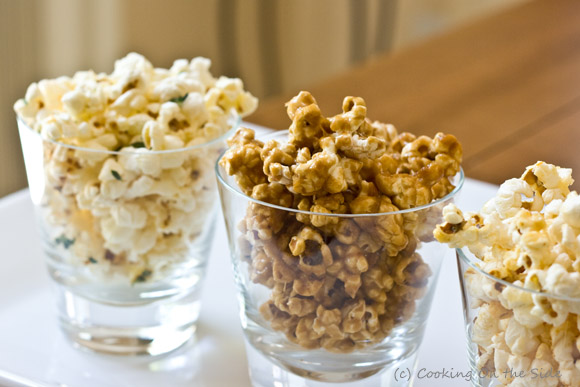 Pour cooking oil and popcorn into any heavy, 3 quart or larger pan with a lid. Cover the pan and shake gently (using potholders) over medium-high heat, leaving the lid slightly ajar to allow steam to escape from popping kernels. Remove the pan from the heat when the popping stops and carefully pour the popped kernels into a large bowl. Season to taste. 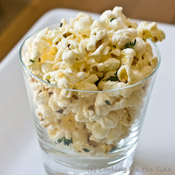 In a large bowl, drizzle extra virgin olive oil over the popped popcorn and toss to coat. Sprinkle with sea salt and thyme and toss again. 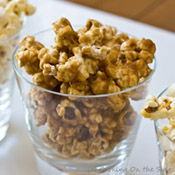 Preheat the oven to 250° F. Place popcorn in a very large bowl.

In a medium saucepan over medium heat, melt butter. Stir in brown sugar, corn syrup and salt. Bring to a boil, stirring constantly. Boil without stirring 4 minutes. Remove from heat and stir in baking soda and vanilla. Pour in a thin stream over popcorn, stirring to coat.

Place in a large shallow baking dish and bake in preheated oven, stirring every 15 minutes, for 45 minutes. Remove from the oven, spread caramel corn onto waxed paper and let cool completely before breaking into pieces. 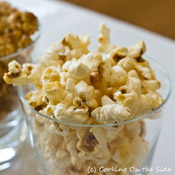 Kettle Corn (adapted slightly from Chaos in the Kitchen)

In a large pot with a lid, add oil and three kernels of popcorn. Turn on the heat and cover the pot. Listen carefully – when the third kernel pops your oil is ready.

Add the rest of the popcorn and the sugar. Give it a quick stir to combine and fully coat. Cover the pan and shake gently (using potholders) over medium-high heat, leaving the lid slightly ajar to allow steam to escape from popping kernels. Remove the pan from the heat when the popping stops and carefully pour the popped kernels into a large bowl. Season with salt to taste (about 1-2 teaspoons).