If you’ve never had pho, I was right there with you until just a few weeks ago. I knew it was a Vietnamese soup (the national dish of Vietnam, it turns out), that it was pronounced “fuh” rather than “foe” and that a lot of people really love it. Like love it.

Happily, pho is no longer a mystery to me. I have now tried it both at a restaurant (Nam An in Kearny Mesa, which came highly recommended by Twitter friends) as well as at home, using an organic pho starter from Pacific Natural Foods. What I enjoyed most about both versions were the bold, complex flavors of the broth and the myriad of condiments – bean sprouts, lime, chiles, culantro to name a few – that you can add in with your chicken and rice noodles to customize each spoonful. It’s such an incredible comfort food.

I wasn’t sure if the prepared broth – albeit an organic one without any preservatives – would measure up to the kind I’d find in a well-regarded Vietnamese restaurant. But I was definitely game to put it to the test. Read on for my comparison of the Easy Chicken Pho I made with the Pacific starter versus the restaurant version plus the chance to win a Pho Starter Kit. 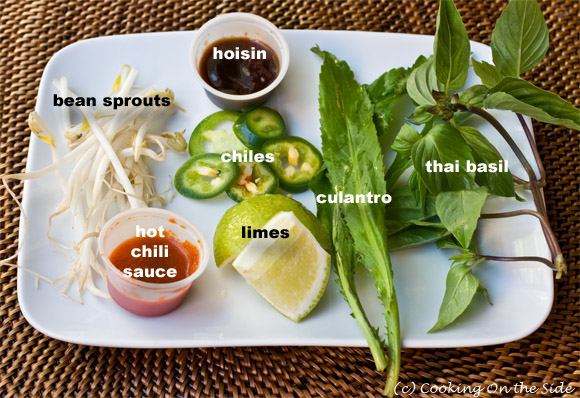 When it comes to broth, I believe homemade is best…but it’s not always the most convenient. It can take eight to ten hours to make a really good, flavorful-yet-clear pho broth (although there are recipes that require less time). The broth from Nam An was very rich and robust – the warm flavors and aromas of anise, ginger and cinnamon were just heavenly. The pho starter from Pacific was a bit milder but still very flavorful and aromatic. Often prepared stocks are really salty but in this case the starter seemed to have considerably less salt than the restaurant version. A flavorful organic broth that can be turned into delicious pho within 20 minutes and cuts back on the sodium sounds like a pretty nice option to me.

Pacific Natural Foods would like to send one Cooking On the Side reader a Pho Starter Kit, which includes two organic soup starters, a soup bowl and spoon and chopsticks.

Here are four ways to enter – you can do any or all of them (please leave separate comments for each entry): [THE GIVEAWAY IS NOW CLOSED]

The giveaway will close Monday, October 31, 2011 at noon PDT. I will use random.org to select one winner to receive the Pho Starter Kit and announce the winner in this post. This giveaway is open to U.S. residents only.

Pacific Natural Foods provided me with a Pho Starter Kit  to use in evaluating their product and is sponsoring today’s giveaway. All opinions expressed are, as always, entirely my own.