A little known fact about me: I am a bit of a family history buff. I’ve assembled more than 1,500 names so far in our family tree. One branch goes back to the early 1600’s. It’s been like putting together the ultimate jigsaw puzzle, just a few pieces at a time over many years. I don’t know if any of you have been watching the “Who Do You Think You Are?” show on NBC for the past few weeks, where they trace celebrities’ family trees, but I find this stuff incredibly fascinating.

Like that of a lot of families, our heritage is comprised of a multitude of cultures, which is why we went as “American” for a little friend’s heritage-themed costume birthday party this past weekend. In honor of the side of the family that will be celebrating Passover this week, I made the unbelievably easy Coconut Almond Macaroons recipe I found on a tube of almond paste.

Until now, the only macaroons I’ve ever eaten have come pre-packaged in a canister. Dense and super-chewy, they haven’t been my favorite cookies. Still, I held out hope that a homemade version would be much more palatable and they most definitely were. Perhaps it was because I didn’t pack them overly tightly that they came out with a much lighter texture than the kind in the canister. Warm, right out of the oven, they were little mounds of coconut heaven. Even a day later, stored in an airtight container, they maintained their light, gently chewy texture. 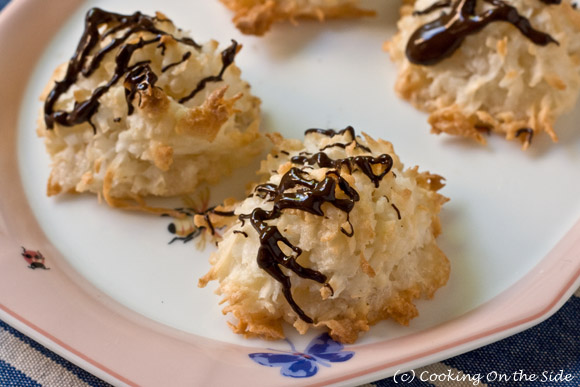 Line two cookie sheets with parchment. In a large bowl, beat egg whites and extract until firm, but not dry. In a separate bowl, beat almond paste, sugar and coconut until the texture of small crumbs. Gently fold mixtures together. Drop tablespoons of dough 1 inch apart onto cookie sheets (small scoop with wire release works well). Bake for 18 minutes, or until lightly browned on bottom, and firm to touch. Cool cookies on wire racks. Leave plain or decorate with chocolate if desired.

* When I made these I didn’t realize the almond paste needed to be grated until it was too late. However, I was able to incorporate it relatively easily with the use of a pastry blender.