In my seventh grade home ec class, circa 1987, we churned out such memorable delicacies as turkey tetrazzini, purple cows (that would be a tall glass of Shasta grape soda with a scoop of vanilla ice cream dropped in) and hamburger macaroni. But my favorite of them all was chocolate pudding pie. It called for three ingredients: instant chocolate Jell-o pudding, a pre-made graham cracker crust and Cool Whip. I thought this was heaven.

In 2011, Chocolate Cream Pie with Cinnamon and Ancho Chile is way more my style.

I’m not so much of a food snob now that I’d necessarily run away from instant chocolate pudding…but homemade chocolate pudding slowly stirred on the stove with Scharffen Berger chocolate stops me in my tracks. Sure, I’ll bake pies with a store-bought pie crust every now and then…but a freshly baked graham cracker crust gently spiced with ancho chile powder and cinnamon is a thing of beauty. If a recipe insists on “frozen whipped topping” I’ll probably just go with it…but I’ll leave not a drop of vanilla-scented freshly whipped cream on my spoon.

This is the kind of dessert that, with its pillowy, mousse-like filling, “tastes light” even though you know it’s oh-so-decadent. But I made it for a very special occasion – my husband’s birthday – so it was well worth the indulgence. 🙂 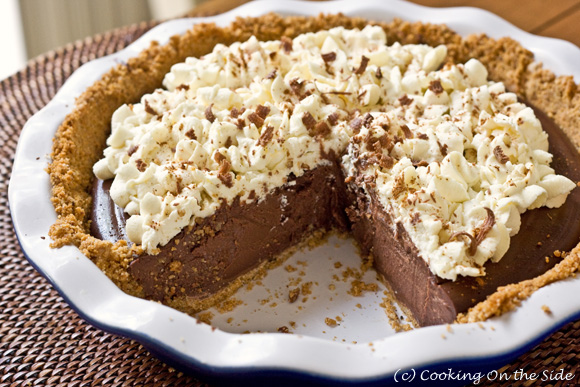 From the Scharffen Berger Chocolate Cream Pie with Cinnamon and Ancho Chile recipe, by Alice Medrich, that was handed out to BlogHer Food ’11 conference attendees

Make the topping and finish the pie: