When you enter a holiday potluck carrying a basket studded with savory lollipops, people pause their conversations to check out what you’ve got there. At least that’s what happened when I brought these Cheese Ball Pops.

The idea of converting the cheese log recipe I posted a few years ago into bite-sized lollipops came to mind after I saw a Goat Cheese Pops with Herbs, Pecans and Bacon appetizer on Mom It Forward. While I was at the grocery store, collecting all of the ingredients to make the goat cheese pops for the potluck, I realized that way you make the pops is remarkably similar to the old familiar cheese log…except it’s on a stick.

So I went back to that cheese log recipe. Instead of rolling the cheese and honey mixture into a log I just rolled them into little balls. I made them a little on the small side (think Dum Dums rather than Blow Pops) so they could neatly be consumed in a single sweet and savory bite. People really went for these – they thought it was a fun spin on the traditional appetizer. I’m sharing the recipe and rolling technique that I used but I’ll bet you could easily adapt almost any cheese log recipe into pops. Give it a try! 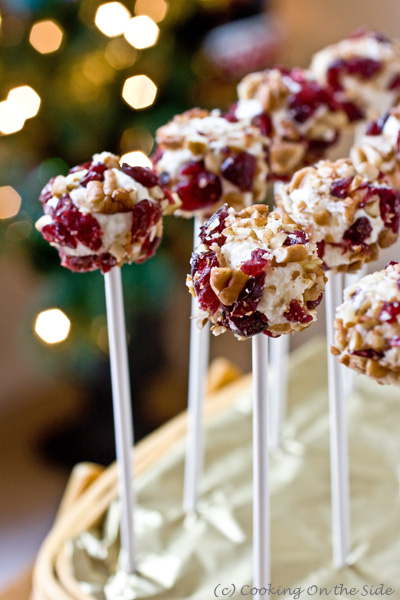