My mother-in-law called me immediately when she saw the Food Network promos for the “Throwdown with Bobby Flay” episode featuring matzo ball soup. I set my DVR to record it right away – I was going to need all the tips and techniques I could get. When she and my father-in-law were out here visiting from the East Coast a week earlier she suggested that I try out her longtime recipe for matzo ball soup. As it turns out, she had cut out the recipe from a box of Horowitz-Margareten Matzoh Meal almost 40 years ago. With Passover approaching, the opportunity to try out this “vintage” on-the-package recipe was irresistible.

I have to confess, I was initially a bit intimidated by matzo balls. You hear all the horror stories of really bad ones – thick, dense, spongy. Even my food blogging friend, Lydia, admitted to having made some her family described as “depth charges”. How was I, someone who had only ever eaten matzo ball soup maybe once in her life, going to defy the odds and make light, fluffy, flavorful dumplings? My solution: absorb all the advice I could come by. And it worked!

With the guidance of my in-laws, that “Throwdown” episode and a number of recipes I found online I am incredibly proud to report that I actually made tasty matzo balls that float! Now, I did deviate from the Horowitz-Margareten recipe in three key places to make it happen. First, in place of cold water I used seltzer (or “club soda”, as we know it on the west coast) which I heard over and over again was key to fluffy matzo balls. And rather than oil or shortening, I used schmaltz, or rendered chicken fat, which provided wonderfully rich flavor. Lastly, I allowed the matzo mixture to rest in the refrigerator for about 5 hours rather than 20 minutes. Bobby Flay actually let his stand overnight, which I would have done if I’d had the time. I can’t say for sure which of these techniques had the greatest impact, but collectively they produced a terrific result. 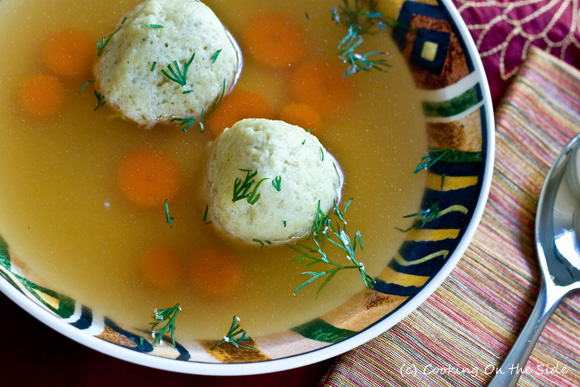 [NOTE: Be sure to read through the entire recipe before you start – there’s a bit of preparation involved!]