Someone in this house is turning 39 this week! All right, it’s me. And I’m celebrating with Dark Chocolate Cake…and a Shake. It’s my rendition of the best dessert I’ve had in San Diego (so far), which they make at D Bar in Hillcrest. It’s good old-fashioned chocolate layer cake, with some of the softest chocolate sour cream frosting you’ll ever taste, and served with a little vanilla shake on the side. It’s my birthday, I can indulge a little!

Can we talk about the frosting first? I hope you can tell from the photos how almost mousse-like this frosting is. It starts with melted chocolate, rather than cocoa powder, and gets its creaminess (and subtle tangy flavor) from sour cream. When I tried this cake with this frosting at D Bar (it’s the recipe they use) I couldn’t get over how homemade and never-been-refrigerated it tasted. You may want to make this cake for the frosting alone.

The cake itself is probably a familiar one – it’s the recipe from the back of Hershey’s cocoa powder, although this time I used the Special Dark powder to step up the chocolate intensity. A notable feature about this recipe is its use of boiling water as an ingredient – the batter turns incredibly thin, but in the end you’ve got super-moist, fluffy cake and deeper chocolate flavor. After I posted a cupcake version of this recipe three years ago, a reader commented that she loves to bake this cake with coffee rather than the boiling water to really bring out the chocolate flavor. I gave that suggestion a try and YES, do it! 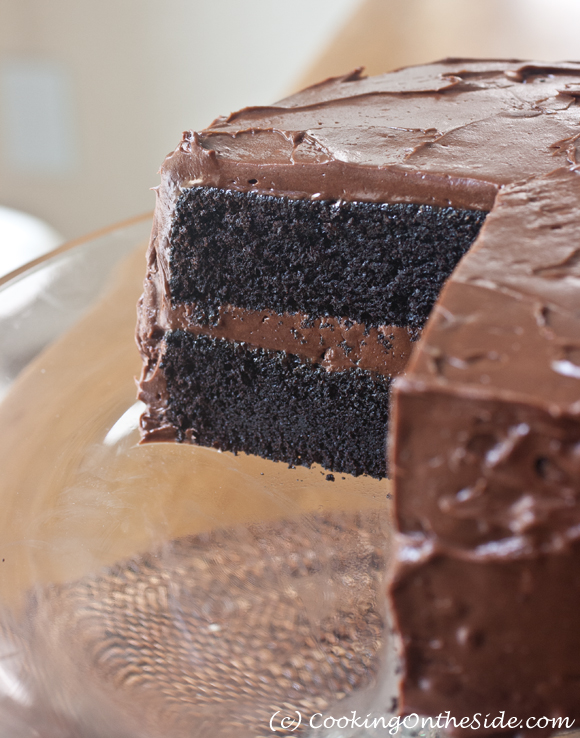