Spinach doesn’t need cream or bacon to make it a good side dish. It’s fine on its own, simply steamed or sauteed with a little lemon. That’s how I typically make it.

If you do happen to mix cream and bacon in with spinach – and maybe some aromatic onions and garlic too for extra savory flavor – well, you’re going to wind up with a pretty excellent side dish. This Creamed Spinach, inspired by a recipe I found on the side of a package of frozen spinach, isn’t the extra thick kind I’ve had at steakhouses in the past. Here the sauce is thinner – just the cream or milk alone absorbing into the spinach rather than a flour-thickened bechamel. It’s a little bit lighter without sacrificing flavor. That works for me! 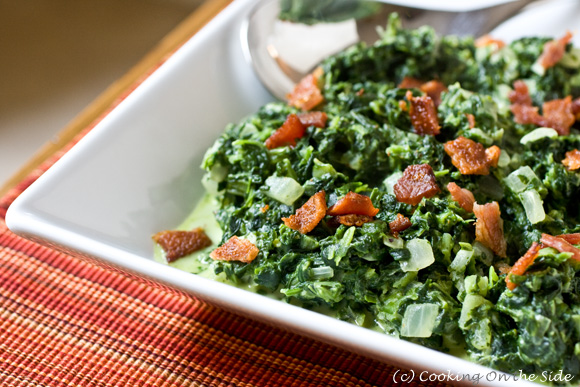